Security Issues with LastPass on Android

LastPass' Android app is one of the most downloaded passwords managers on the Play Store with over 10 million installations. I investigated security issues with the app for my capstone project. Here are some of the biggest problems I found with it. 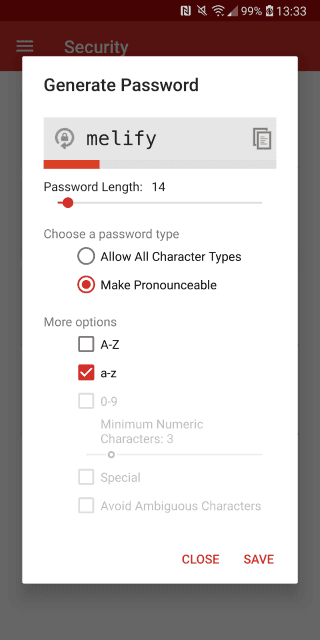 Although this is an extreme case, I found out that approximately one percent of all pronounceable passwords generated by this app are smaller than specified. This is the distribution of lengths of produced passwords when set to generate passwords of length 16:

I suspect that nobody counts the number of characters in the generated passwords. On my device, I can't even see the entire password if it is more than 14 characters long. If you use or have used the option in the past to generate pronounceable passwords, check the lengths of your passwords. You may find that some of them are smaller than what you wanted.

Moreover, the character distribution is not great. Just 500 distinct trigrams make up over 50 percent of all produced three character sequences in passwords. The frequency distribution of characters produced by the generator is not so good either. 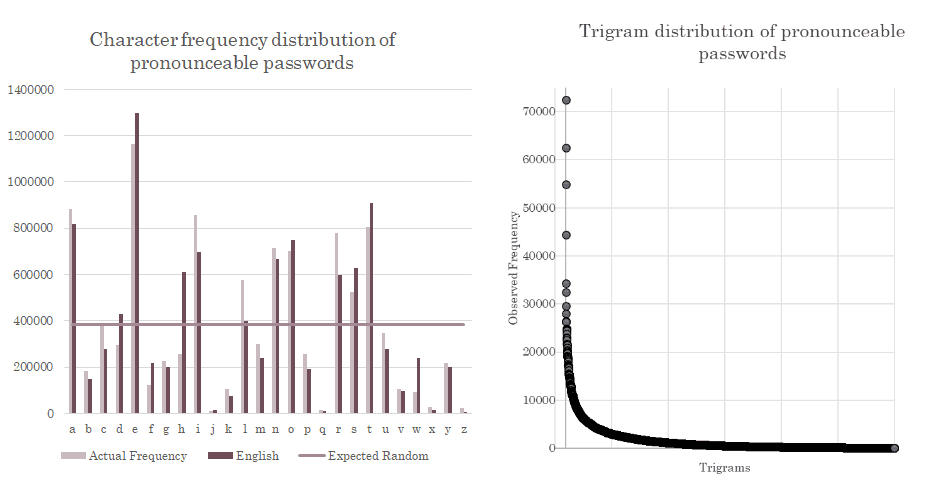 An important thing to note here is that LastPass is using Tom van Vleck's pronounceable password generator. LastPass has modified it to use java.security.SecureRandom. The original password generator only produces lowercase passwords; LastPass uses the generated password and then randomly makes characters in it uppercase if the A-Z option is selected.

The strength meter that LastPass includes just below the generated password, zxcvbn4j, does not indicate the true strength as it is not designed to take into account the character distribution. As a result, the strengths of produced passwords is overestimated. If someone learns that you've used the option to generate pronounceable passwords, the strength of your passwords against a brute-force attack will decrease by several orders of magnitude.

The app includes a web browser built on Android WebView. The biggest issue with the browser is that it leaks user searches through DNS and TLS SNI. Let's say you type in foobar into the box. The app makes a brilliant decision and takes the user to www.foobar.com. This, unsurprisingly, requires making a DNS query. DNS requests are unencrypted: anyone listening on the wire can see that you are interested in foobar. The fact that LastPass manages your passwords makes it even more dangerous. If you accidentally paste a password from the clipboard into the browser, everyone knows your password now. Even if you use encrypted DNS, the password may still be visible in plaintext through TLS server name indication (SNI).

The app has a few other issues:

How did I find all this?

I studied Android password manager apps for my final project during my undergraduate studies. I also found other security issues in the LastPass app that are intentionally not included in this blog post. Complete details and observations are documented in my submitted thesis which I will make public very soon. I have also analysed two more popular password managers and would be writing about my findings very soon.

If you have any doubts or comments, please feel free to reach out to me. I will be happy to share all my findings and observations.

I have informed LastPass about all of these issues a few weeks ago. I think that they have already fixed a few of them. Hopefully, they will fix the remaining issues very soon.